The Bulgarian – Japanese relations in the focus of a meeting with H.E. Masato Watanabe 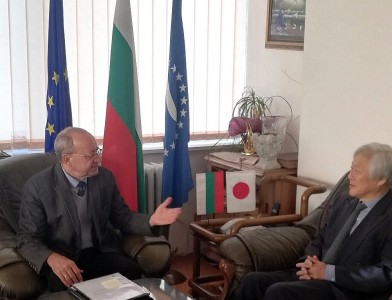 The President of BCCI Tsvetan Simeonov discussed with the Ambassador of Japan to Bulgaria H.E. Masato Watanabe the state of the bilateral economic relations during a meeting at the Chamber.

The President of the Chamber and Ambassador Watanabe agreed that companies do not take full advantage of the EU – Japan Free Trade Agreement. The preferential conditions and customs duties for certain goods are a great facilitation for Bulgarian companies and they can benefit and profit from the agreements reached at EU level. Tsvetan Simeonov also pointed out the advantages of doing business in Bulgaria.

The recent visit of the President of Republic of Bulgaria Rumen Radev to Japan on the occasion of the enthronement of the Japanese emperor was also discussed. During his visit, the Bulgaria Head of State had meetings and talks with representatives of Japanese companies – world leaders in the field of electronics, energy, cosmetics, food production, etc., organized by the Japan – Bulgaria Economic Association, whose Chairman is the former Japanese Ambassador to Bulgaria Koichiro Fukui.