In support of the Bulgarian – Turkish economic relations 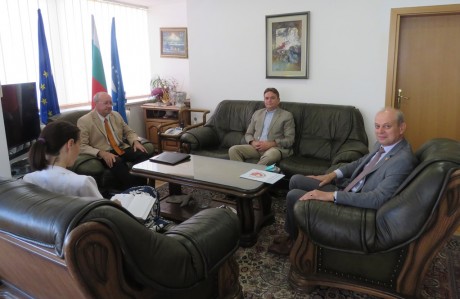 The President of BCCI Tsvetan Simeonov met with representatives of the management of the Bulgarian – Turkish Chamber of Commerce and Industry – Branimir Mladenov and Serhan Sert, Vice-presidents.

During the meeting useful information was exchanged about the challenges facing companies that are developing Bulgarian – Turkish trade, economic and investment relations in the current moment of global crisis. Simeonov shared some of the actions taken by BCCI to support companies in the country in this period of hardships.

The guests informed that in May the Bulgarian – Turkish Chamber of Commerce and Industry signed a Memorandum of Understanding with the Union of Chambers and Commodity Exchanges of Turkey (TOBB), which envisages expansion of the cooperation between the Union and the bilateral chamber. Tsvetan Simeonov pointed out that TOBB is a key and long-term partner of BCCI – both at national level and within the Association of the European Chambers of Commerce and Industry (EUROCHAMBRES).

The relations with the Turkish – Bulgarian Business Council at the Council on Foreign Economic Relations of Turkey (DEIK) were also discussed, with whose new management the President of BCCI had a meeting in May.