BCCI presented with a honoured diploma H.E. Mr. Jin-Kyu Jeong, Ambassador of the Republic of Korea to Bulgaria 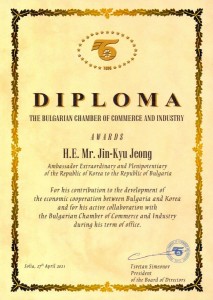 Bulgarian Chamber of Commerce and Industry honoured with  a diploma the Ambassador of the Republic of Korea to Bulgaria H.E. Mr. Jin-Kyu Jeong on the occasion of his departure. The diploma was presented by the President Tsvetan Simeonov , stressing the exclusively intensive cooperation between BCCI and the Embassy of the Republic of Korea.

In November and December 2018 BCCI was a host of business meetings with Korean delegations – representatives of municipal government and of the Chamber of Commerce and Industry of Gimpo city. Many Korean companies took part in the event and noted their interest to the Bulgarian market.

The session of the Committee for industrial cooperation was held in 2019 in Seoul together with a business delegation during the visit of the Bulgarian prime minister to the Republic of  Korea. The President of BCCI had a number of business meetings with Korean partner organizations.

The Ambassador Jeong initiated also business conferences, diplomatic and cultural events. A part of them were dedicated to the 30-th anniversary of the establishment of the diplomatic relations between Bulgaria and Republic of Korea.