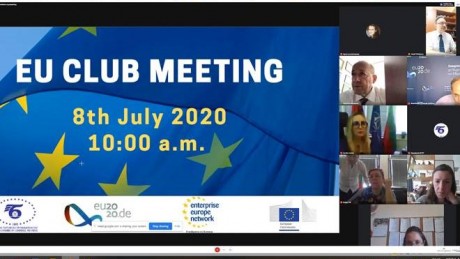 On 8th July 2020, Enterprise Europe Network to the Bulgarian Chamber of Commerce and Industry organized the traditional EU Club meeting, dedicated to the assumption of the Presidency of the Council of the EU by the Federal Republic of Germany. For the first time in 20 years the meeting was held online.

The participants in the online discussions were: Mr. Giacomo Mattinò, Head of Unit, DG GROW, European Commission, H.E. Ms. Jasna Ognjanovac, Ambassador Extraordinary and Plenipotentiary of the Republic of Croatia in Bulgaria and H.E. Mr. Christoph Eichhorn, Ambassador Extraordinary and Plenipotentiary of the Federal Republic of Germany in Bulgaria. Diplomats, representatives of the business, NGOs and media also joined the online event.

In his opening speech, the President of BCCI, Mr. Tsvetan Simeonov welcomed all the participants and the special foreign guests to the online meeting. Mr. Simeonov reminded that the presidency of the Council of the EU in the past six month had to be chaired in "difficult times" determined by the COVID-19 pandemic. The President wished success to the German Presidency of the Council in its work on Europe’s recovery.

The president of the EU Club, Prof. Ingrid Shikova, congratulated Croatia on the results achieved during the Croatian Presidency, despite the difficulties that occurred in the last six months. Prof. Shikova also added that Germany is a big country and we know that during its Presidency it is very likely significant things to happen. She wished them successful 13th presidency.

Mr. Giacommo Mattino, shared with the participants in the online EU Club important information about the EU budget for the future MFF 2021-2027. He said that the Single Market is a cornerstone of the EU and that there is a need of a strategic and integrated approach towards delivery of a well-functioning Single Market. Mr. Mattino pointed out that a key priority of the European Commission is to improve competiveness of enterprises with special emphasis on the SMEs.

The EU Club meeting continued with the presentation of the Croatian Ambassador in Bulgaria, H.E. Ms. Jasna Ognjanovac, who said that over the past six months the country had to quickly shift the focus from the priorities of the Croatian presidency to the most important priority, the safety of the European citizens.

The online meeting concluded with a presentation on the priorities of the German Presidency of the Council of the EU by H.E. Mr. Christoph Eichhorn. He took the opportunity to mention that the German Presidency of the Council of EU would support and continue what Croatia has achieved. Mr. Eichhorn noted that it is more important now than ever before to set clear priorities and to join forces.

For more information about the EU Club please check the link: https://www.bcci.bg/euclub/index.htm