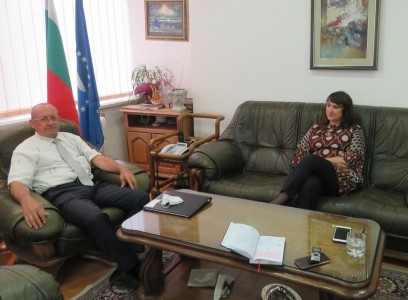 After eight successful editions of the Balkans International Wine Competition and Festival (BIWCF), its organizer and ideologist Galina Niforou is about to face a new challenge – the major 9th edition of the event, which will take place in the year marked by the global coronavirus crisis.

In 2020, the competition part of BIWCF will go beyond the borders of Bulgaria and will be held in Belgrade, Serbia. At a meeting with the President of BCCI Tsvetan Simeonov, Galina Niforou revealed details about the event. It will take place in the period 15 – 17 July at the Falkensteiner Hotel in Belgrade. A commercial tasting is also planned, which is good for all wineries. Importers and distributors from all over Europe have been invited.

Tsvetan Simeonov noted that despite the difficulties and obstacles that accompany the COVID-19 crisis, the BIWCF continues its success story and strengthens its role in support of closer Balkan co-operation. “As partners and co-organizers of the event, we also rely on our traditionally good relations with the Serbian Chamber of Commerce and Industry, which has already significantly contributed to the preparation of the BIWCF”, Simeonov said.

More about the competition part of the festival and participation HERE.