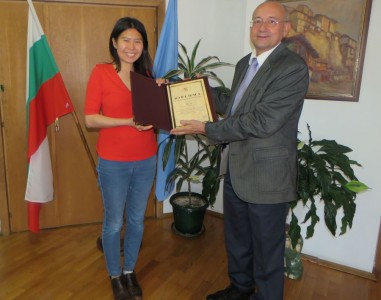 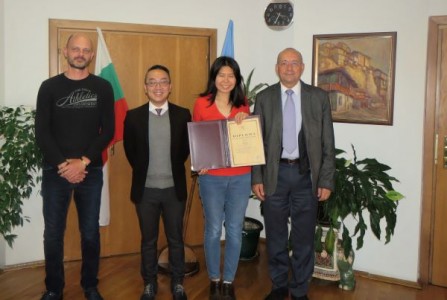 The President of the Bulgarian Chamber of Commerce and Industry Tsvetan Simeonov met with Ms. Patty Lin, Director of the Representation of Taiwan External Trade Development Council (TAITRA) in Sofia.

During the meeting the newly-appointed Director of TAITRA Mr. Shane Tsai was introduced. The good cooperation between BCCI and TAITRA so far, as well as the bilateral trade and economic relations between Bulgaria and Taiwan were discussed.

The President of BCCI acquainted his guests with the activities of the Chamber in support of the development of the business environment in Bulgaria, as well as with its membership in various international organizations open to chambers of commerce.

The guests were also presented with publications and information materials issued by the Chamber that provide an overview of the economic situation in the country.

At the end of the meeting, Tsvetan Simeonov presented Patty Lin with an Honorary Diploma on the occasion of her departure from Bulgaria and for her contribution to the active cooperation with the BCCI and the development of trade relations between Bulgaria and Taiwan during her term of office in our country.