Grand Hotel Millennium Sofia became a member of the Chamber 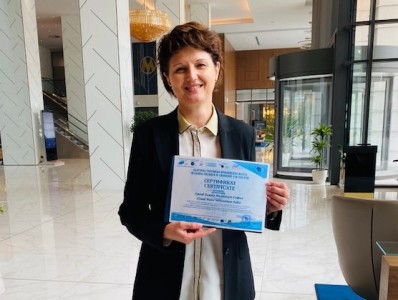 Grand Hotel Millennium Sofia became a direct member of the BCCI. The President of the Chamber Tsvetan Simeonov presented the Certificate of Membership to the General Manager of the hotel Zhulieta Serafimova.

A few months after its opening, Millennium is already emblematic of the highest segment in Sofia. It has 400 exceptional rooms and apartments - all gracefully furnished in unison with the latest trends in this sector, located from the 6th to the 29th floor. The view in all directions is unique - to the park, to the mountain, to the heart of Sofia.

An extremely important part of the hotel is its convention center with a total area of almost 5000 sq.m. and 15 multifunctional conference and banquet halls, the largest of which has over 700 seats.

The hotel also has a large SPA and Wellness center. The restaurants in Grand Hotel Millennium are already popular with their location, view, interior and the various culinary experiences they offer. And the fact that the hotel opened its doors during the Covid-19 crisis is a direct proof that there is no inappropriate time for good ideas!