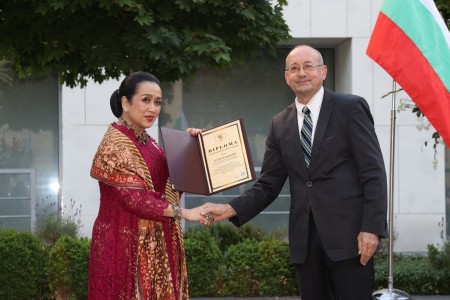 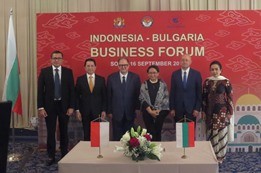 The Bulgarian Chamber of Commerce and Industry (BCCI) awarded H.E. Mrs. Sri Astari Rasjid, Ambassador Extraordinary and Plenipotentiary of Indonesia in Sofia with an Honorary Diploma on the occasion of the end of her term of office in the country. The President of BCCI Tsvetan Simeonov awarded the Diploma during the official presentation of Ambassador Rasjid’s book “Art of Diplomacy”, which was held at the National Gallery.

The Chamber awarded H.E. Mrs. Sri Astari Rasjid for her active cooperation with the BCCI and her contribution to the development of the economic cooperation between Bulgaria and Indonesia during her term of office since March 2016.

With the active collaboration of Ambassador Rasjid, BCCI and the Embassy of Indonesia organized regular meetings during which important economic data and information about legislative changes in both countries were exchanged, as well as a number of events. The most significant among them were the meeting with a business delegation from the Regional Representatives Council of the Republic of Indonesia, and the Bulgaria – Indonesia Business Forum on the occasion of the official visit of the Minister for Foreign Affairs of the Republic of Indonesia – Retno Marsudi to Sofia in September 2019.

Copies of Ambassador Rasjid’s book “Art of Diplomacy” in Bulgarian and English were gifted for the needs of BCCI’s Library. We are pleased to note that the signing of the Memorandum of Understanding between BCCI and the Indonesian Chamber of Commerce and Industry in September 2019 is also included in the book.