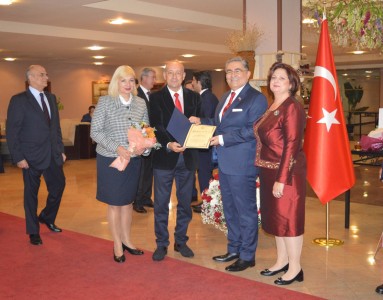 H.E. Dr. Hasan Ulusoy, Ambassador Extraordinary and Plenipotentiary of the Republic of Turkey in Sofia, received an Honorary Diploma from the Bulgarian Chamber of Commerce and Industry on the occasion of the end of his term of office in Bulgaria. The award was presented by the President of BCCI Tsvetan Simeonov during the celebration of the National Day of Turkey.

BCCI awarded Ambassador Ulusoy for his active collaboration with the Chamber and for his contribution to the development of the economic cooperation between the Republic of Bulgaria and the Republic of Turkey during his term of office.

Since the beginning of Ambassador Ulusoy’s mandate in Bulgaria, the Embassy and BCCI have been regularly cooperating and exchanging information on upcoming trade missions in Turkey, participating in a number of events, including the Bulgarian – Turkish Business Forum, organized jointly with the Turkish Foreign Economic Relations Council (DEIK), with the participation of Minister Karanikolov, the visit of the President of the Union of Chambers and Commodity Exchanges of Turkey (TOBB) - Rifat Hisarcıklıoğlu to the Bulgarian edition of the European Parliament of Enterprises 2018 in Sofia, a Turkish business delegation from Kocaeli Chamber of Commerce, and many others.