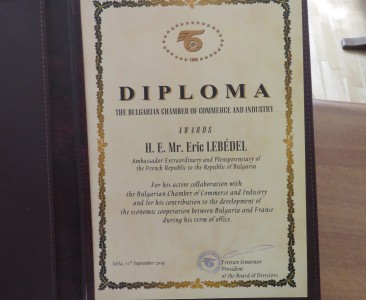 H.E. Eric Lebedel, Ambassador Extraordinary and Plenipotentiary of the French Republic in Sofia received an Honorary Diploma from the President of the Bulgarian Chamber of Commerce and Industry Tsvetan Simeonov on the occasion of the end of his term of office in the country.

The Chamber awarded the Ambassador for his active collaboration with the Bulgarian Chamber of Commerce and Industry and for his contribution to the development of the economic cooperation between Bulgaria and France during his mandate.

Tsvetan Simeonov said that the Embassy of France is a long-standing and reliable partner of the Chamber and with very close relations with the Bulgarian business community and BCCI, as well as with the French-Bulgarian Chamber of Commerce and Industry.

Since the end of 2016, a number of events promoting the commercial and economic relations between the two countries have been organized by the Embassy of France in Sofia, including a visit of a business delegation from the French employer federation MEDEF, the French Association of Private Enterprises and the Industrial Association in 2017.