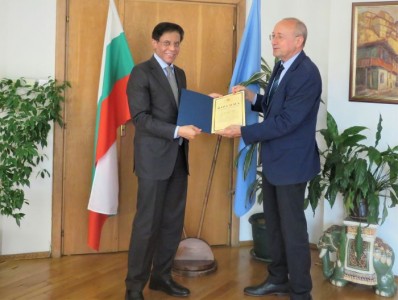 H.E. Mesfer Abdulrahman Al-Ghaseb, Ambassador of the Kingdom of Saudi Arabia in Sofia, visited the BCCI before the end of his term and spoke with the President Tsvetan Simeonov.

The President of the Chamber presented an honorary diploma to Ambassador Mesfer Al-Ghaseb on the occasion of his departure from Bulgaria. The diploma is for his contribution to the development of economic cooperation between Bulgaria and Saudi Arabia and for active cooperation with the Bulgarian Chamber of Commerce and Industry during his term.

The development of economic relations between the two countries was discussed at the meeting. It was noted that the current level of economic cooperation does not satisfy both parties. There are many different opportunities for the development of trade and investment process between Bulgaria and Saudi Arabia.

Ambassador Al-Ghaseb said he saw great potential in the development of the tourism sector. Saudi tourists spend more than $ 150 million per year for tourism. Potential for development exists in bilateral cooperation in industries such as: agriculture, construction, aviation development, spa tourism and others.

It was agreed that in the near future the BCCI and the Embassy of the Kingdom will jointly organize an information event on the status and guidelines of bilateral business contacts.