Meeting with the Ambassador of Northern Macedonia H.E. Marjan Gjorchev 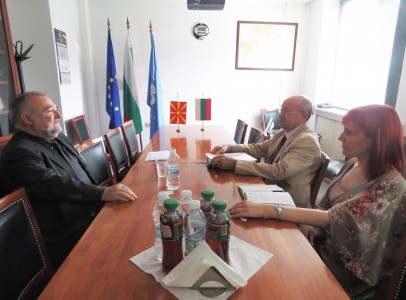 The Ambassador of Northern Macedonia to Sofia H.E. Marjan Gjorchev discussed with the President of BCCI Tsvetan Simeonov the current state of the bilateral trade and economic relations.

During the working meeting, a slight decline in the trade between the two countries for the first quarter of 2019 was noticed compared to the same period last year, as a result a task has been set to analyze the causes of the downturn and to identify concrete measures for the development of the trade and economic relations between Bulgaria and Northern Macedonia.

The lack of change in the logistics’ conditions between the two countries as well as the need to reduce the prices of the services of the mobile operators and the roaming between Bulgaria and Northern Macedonia was discussed.

Tsvetan Simeonov reminded of the proposals of the Bulgarian-Macedonian Chamber of Commerce and Industry (BMCCI) for the development of the bilateral cooperation between Bulgaria and Northern Macedonia, which have practical character. The President of BCCI stated that the BMCCI's “White Book” offers a number of measures before the governments of the both countries so as the business climate to be improved and the economic, technological and technical cooperation to be developed.

According to data from the Bulgarian Ministry of the Regional Development, 48 projects with a total value of more than EUR 10 million have already been completed under the cross-border cooperation program with the Republic of Northern Macedonia. New 17 contracts are being implemented for EUR 5 million in the fields of the environmental protection, climate change, improvement of river flow, protection of the local population from floods and fires, protection of cultural heritage, tourism development and more.

The acceleration of the trans-European corridor number 8 is of particular importance, which is the shortest link between the Adriatic and the Black Sea. So far, Bulgaria has done a lot for its realization through the construction of the Trakya highway, “Struma” highway is still under construction. The challenge now is to look for opportunities to realize the Dupnitsa-Kyustendil-Gyueshevo high-speed road. The construction of the new border checkpoint Klepalo is in its final stage which in turn will improve the economic links.